SERSE A fior d'acqua,cm 98×46, graphite on paper on aluminium 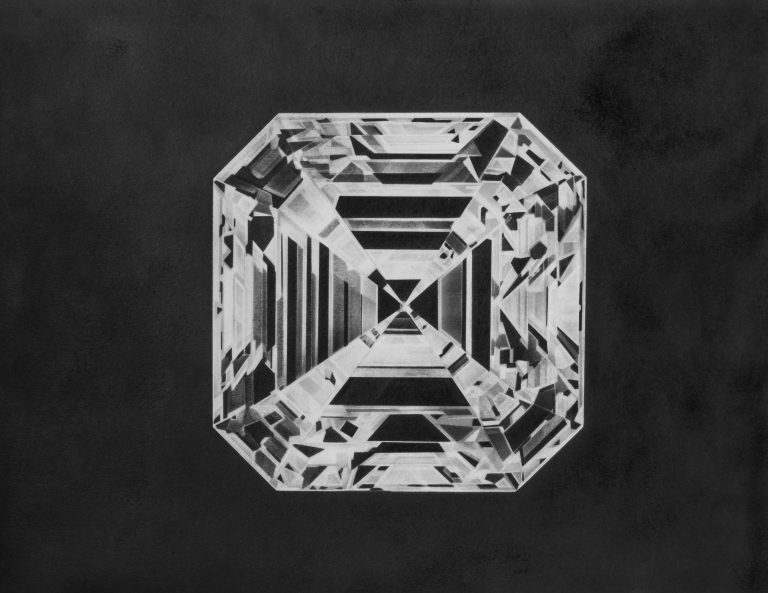 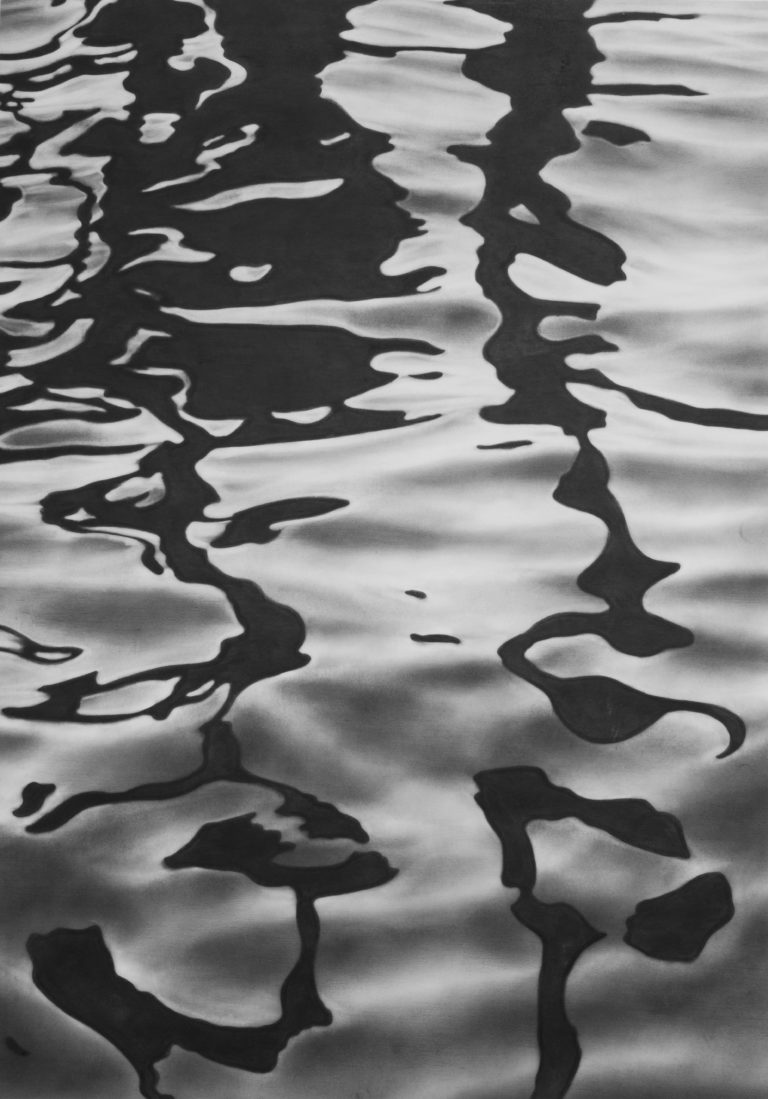 SERSE ROMA A fior d'acqua,cm 70×49, graphite on paper on aluminium 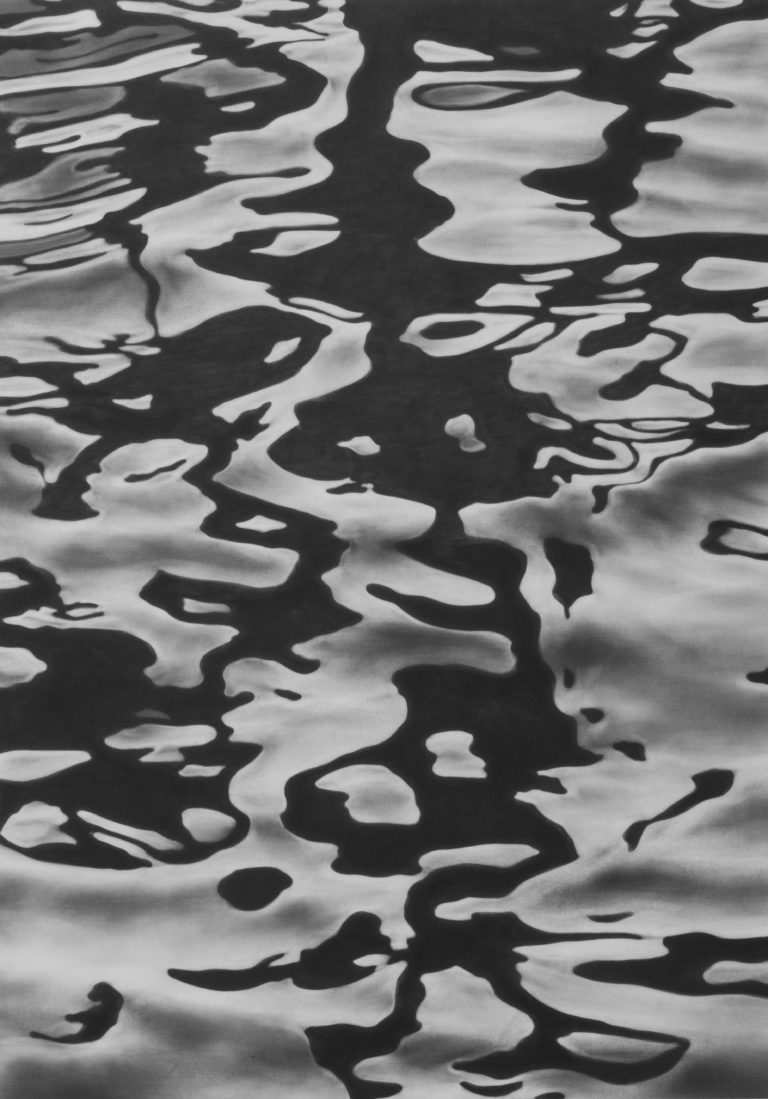 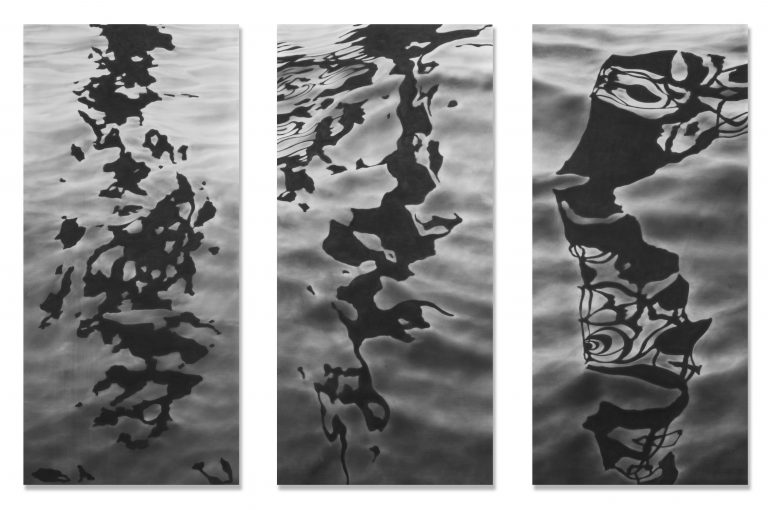 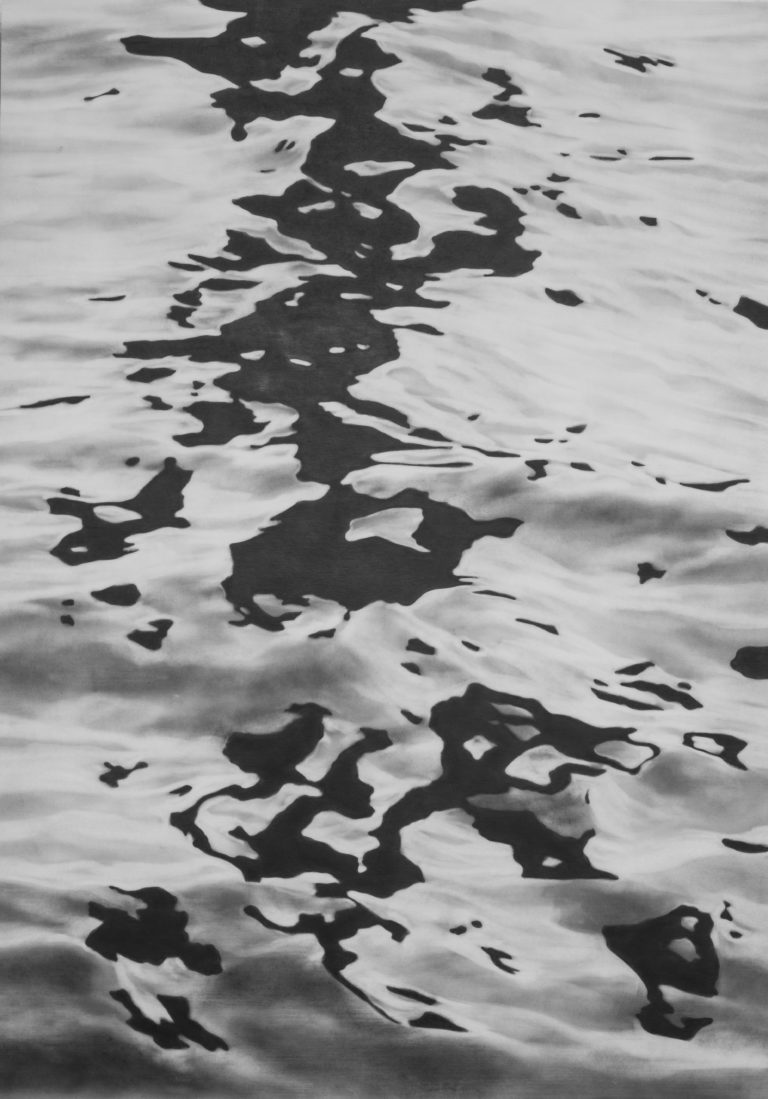 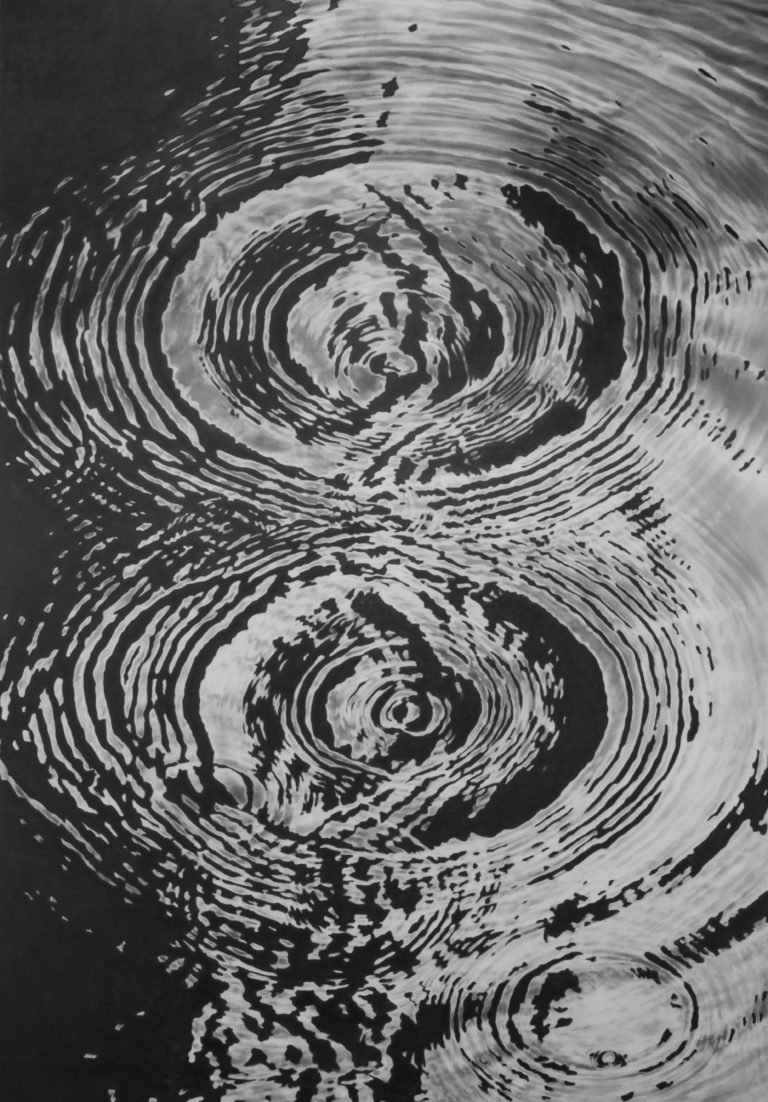 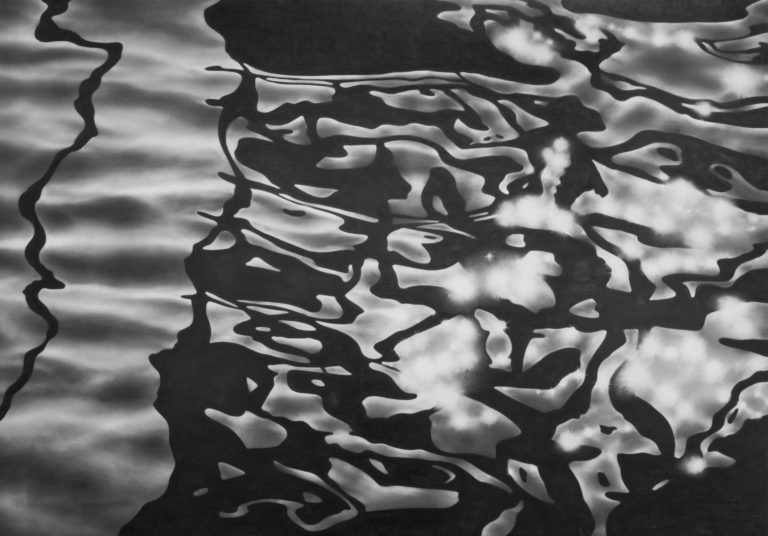 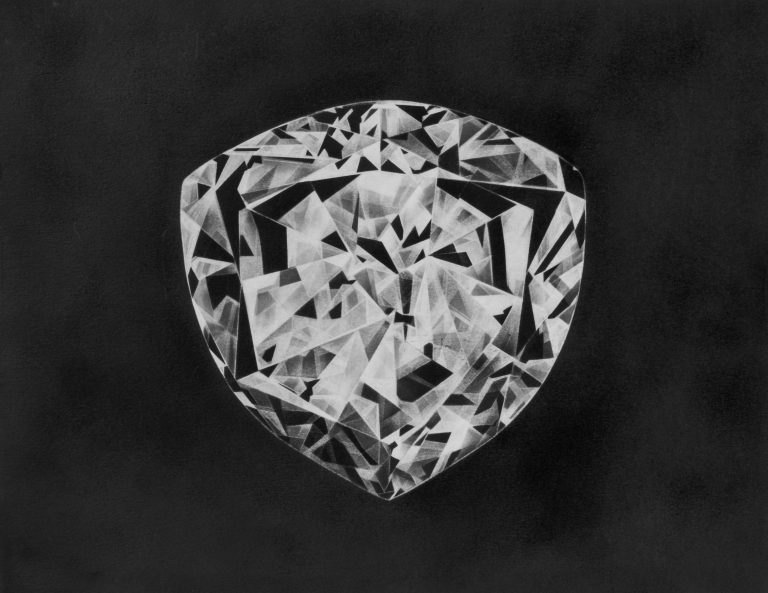 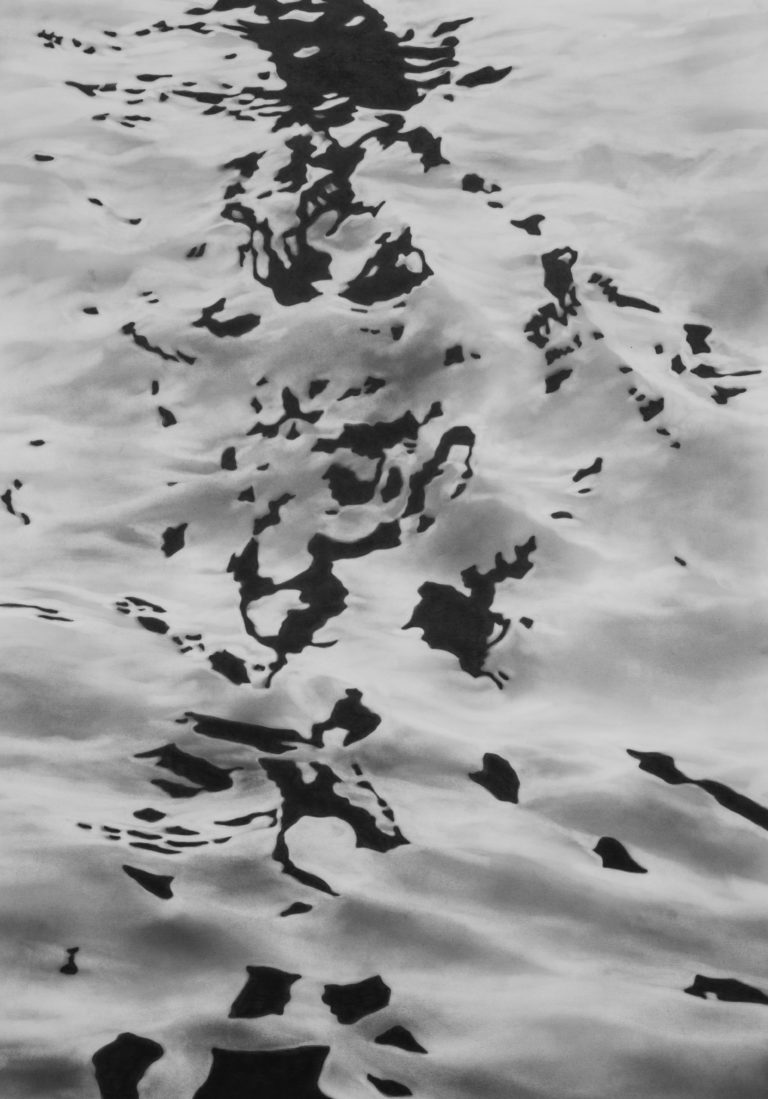 Serse Roma A fior d'acqua,cm 70×49, graphite on paper on aluminium

A matter of relationships

Painting has always been a matter of relationships. First of all, the relationship between the artist and the chosen medium spread on the canvas comes into play, the result then goes on to involve the viewer’s body as well. Once completed, the work acquires its own independence, which is independent of who created it. There is no painter who does not pay close attention to this process, in the present as much as – and perhaps more –  in the past. In exhibitions, museums or churches we are used to observing the finished product, the result of the exchange – often lively and painful – between the painter and his painting, when all tension has died down and the forms have taken on the autonomy useful for getting in touch with the feelings of other people, without the need for the physical presence of the artist. However, this is the end of a long and bumpy journey. An itinerary that in the 1960s began to arouse the interest of critics and philosophers alike: the so-called “creative process”, which some artists considered even more meaningful than the final result. What is presented as a novelty in the second half of the twentieth century has always characterized the work of artists on closer inspection. There is no masterpiece that is not the result of a series of movements and strokes, decisions and phases that, in themselves, contain much of the charm of the work itself.

Who would ever, under the vault of the Sistine Chapel, be ready to believe that Michelangelo spent the first few weeks fighting with a moldy fresco that did not want to dry? The artist had never dealt with this technique before: he therefore decided to seek the help of colleagues more experienced than himself, who prepared the paint to be used on the ceiling of the chapel. After the first few days, they noticed that the plaster didn’t dry, and on the contrary, they noticed the emergence of mold and unexpected moldy growths. Buonarroti, incredulous in the face of a problem that seemed to him unsolvable, even considered giving up the job until Giuliano da Sangallo came to his aid,  revealing the error with the chosen medium that he had run into. The mixture of the plaster was wrong, the amount of water used was excessive, because in Rome, where travertine dust is used and not marble dust – as is customary in Florence – the plaster needed to be drier. A question of quantity, a technical problem, a fact so prosaic and not very exciting that it is never told to the millions of tourists who flock to the Vatican Museums. Yet, if that impasse had not been overcome, the overwhelming figures of the Sistine Chapel would never have existed. The labor that generated the masterpiece of that admirable vault also passed through the eye of the needle of that mixture of powder and liquid, which requires perfect balance.

In the same period, in Milan, an unfortunate technical problem put the conservation of another masterpiece at risk. In the refectory of the monastery of Santa Maria delle Grazie, Leonardo’s Last Supper was disappearing. Who ever would have accused Leonardo of compromising his work by using materials that were inappropriate for the environment in which he was working?

In place of the fresco, a solid and durable technique, he painted the Last Supper in tempera, on a wall that was continually subjected to the sudden changes in temperature caused by the kitchen behind, and also attacked by humidity, fumes and salts coming from behind the wall that emerged under the color applied by the artist. A condition that has made the work very fragile, but that over the centuries  has increased its charm, by increasing the mystery of those figures who in the space of a few decades have turned into shadows.

For Leonardo it was not new to encounter technical difficulties in his work. Giorgio Vasari also builds on this, the myth of the artist frustrated by the search for impossible perfection.

It has been found that Leonardo began many things for the intelligence of art and never finished them, as it seemed to him that the hand could not add to the perfection of art or of  things which he imagined because although the ideas were wonderful, with his hands he believed,  even though his hands were most excellent, they could never be expressed as he would have desired. (i.)[1]

We are in the mid-sixteenth century and the artist-biographer already has a clear understanding of the foundations of conceptual art. That conflictual and compelling relationship between the idea and its realization through the gestures and movements of the hands, which Michelangelo in the same period describes in a sublime sonnet.

The best artist has no way to show

That which the marble stone is in itself

With its excess, and only through it arrives

The hand that obeys the intellect.

The ill I flee, the good I look for,

In you, fair lady, proud, untouchable,

Lies hidden:  but the art I do so well

Does not have the desired outcome, and lays me low.

Therefore, not love nor your otherwordly face,

Nor cuelty, nor fortune, nor disdain,

Are the cause of my mischance, nor fate, nor destiny;

If in your heart you carry death and pity

Enclosed together, in my unworthy brain

Nothing but death, burning, can be brought forth.

The hand that obeys the intellect, the idea that precedes practice, the science that becomes experience, to use two phrases dear to Leonardo. The conflicts that emerge during the “creative process” have been clear to artists for centuries, but the unexpected is rarely told when one discusses the genius of a great master of the past. Yet these unexpected difficulties constitute very important moments. They probe and highlight the lively and unpredictable relationship with the chosen medium, which is an integral part of the creative strokes and movements.

The artists themselves were often responsible for this conspiratorial attitude towards the creative process: they did not like to talk about the problems they faced in the creation of a work, they did not declare all the attempts that failed before arriving at the final solution, the masterpiece. Yet much of the charm of art lies precisely in the hard-fought genesis of each great work, the difficulty of which is often directly proportional to its beauty.

We had to wait until the 1940s to see a great change in attitude. Just when the “gesture” the actual work in progress of the work, becomes an integral part of an artist’s poetics, the approach to a work acquires a new meaning. Famous are the photographs that portray Jackson Pollock as he seems to dance on his canvases, brush in hand, cigarette in his mouth, color everywhere. He is immersed in the matter of his paintings, which he molds and manipulates with his whole body. Action becomes art, with all that it entails: time, movement, transformation.

How distant these ideas seem from the work of Serse, however,  we must enter into a profound relationship with his works to understand that this is not the case.

‘As a self-taught person, I trained in painting not by way of a classic academic path but with an almost scientific approach to the study of the materials, from the preparation of the canvases to the chemistry of colors.

The texts I studied were the technical and restoration manuals. The study of Flemish painting did the rest.’

The formal perfection of Serse’s works seems at first sight to conceal the long and obsessive work that his work requires: we are faced with images of surprising finesse, mechanisms organized to the millimeter, like the crystals of the materials they are made of. Yet even the process that Serse puts in motion is not alien to second thoughts, various attempts, erasing and beginning again and to accumulations. It is a matter of strokes, albeit very fine and accurate. The precision of the surface is the result of careful movements of the hands and eyes, which take up – and win against – the challenge of representing matter in motion. The tautology that he stages when he composes the diamonds, revealing the structure of the material he uses to design them, gives way to the fascination of the impossible in works dedicated to nature in motion. Serse’s water is always rippled, his skies are animated by passing clouds that filter the sun’s rays, and even his crystals result from the intertwining of geometric shapes of different textures and opacity. They are moments representing nature, sudden moments that seem destined to disappear and change in an instant. Much of their charm lies precisely in the fact that Serse managed to harness time, staring at it forever without betraying its fluidity. The artist worked on their appearance for days, staring at an image that paradoxically seems to escape our gaze. Movement and stasis coexist. He has patiently solved all the unexpected

that matter reserves and with patience he has built a figure in which all the time spent seems to be resolved in a second. He has led to formal perfection, erasing its defects, phenomena that in nature appear as a manifestation of chaos and chance. It’s a complex relationship that between Serse and his paintings – similar to the one we find ourselves living while in front of them – made up of space and time, which the artist has always tried to dominate and we to interpret, letting ourselves be guided by his strokes.